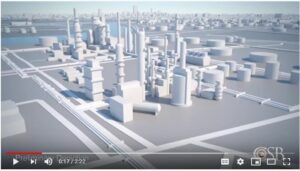 The US Chemical Safety Board (CSB) released a factual update on the June 21 explosion and fire at the Philadelphia Energy Solutions (PES) Refinery in Philadelphia. The update notes that a pipe elbow, which had corroded to about half the thickness of a credit card, appears to have ruptured in the refinery’s alkylation unit, releasing process fluid that included over 5,000 pounds of hydrofluoric acid, or HF. The leaking process fluid formed a large ground-hugging vapor cloud which ignited, causing a massive fire and explosions. Five workers were injured.

Thanks to the heroic actions of four employees, Barbara McHugh, Sal Diberardo, Dave Farrell and Sean McElhinney – members of the United Steelworkers (USW) – thisa massive explosion on June 21st at the Philadelphia Energy Solutions (PES) Refiner in Philadelphia did not turn into a deadly catastrophe. McHugh a control room activated the rapid Acid Deinventory system which dumped HF into a drum away from the fire while Farell, McElhinney and Diberado shut down valves to stop fuel to the fire under firey conditions. All four workers were honored  at a ceremony on September 8 by the Philadelphia Firefighters.

“McHugh’s actions prevented a much larger and potentially catastrophic release of HF. She reacted effectively in response to a failure that, as we’ve seen multiple times, might have been prevented had the company switched to a known safer alternative to HF or had been required to implement a robust, comprehensive PSM program that includes a wall-to-wall damage mechanism review, as required since 2017 in CA by CalOSHA,” said Mike Wilson, National Director of Occupational and Environmental Health, BlueGreen Alliance. Learn more about the campaign that led to the updated PSM standard here.

Hydrofluoric acid is extremely toxic and deadly. Initial air monitoring reports had indicated no HF was released. A large scale release could have meant a catastrophic and deadly event in Philadelphia and for residents located in Camden and Gloucester counties. By PES own data, a worst-case HF scenario includes 143,262 pounds of hydrogen fluoride released over 10 minutes, which could travel as a toxic cloud for more than 7 miles and impact more than a million people.

In April of this year, the CSB called for the US Environmental Protection Agency to review its existing HF study to determine the effectiveness of existing regulations as well as the viability of utilizing inherently safer alkylation technologies in petroleum refineries. CSB Interim Executive Kristen Kulinowski said, “In the last 4 years, the CSB has investigated two refinery incidents where an explosion elevated the threat of a release of HF.  Refinery workers and surrounding community residents are rightly concerned about the adequacy of the risk management for the use of hazardous chemicals like HF.  The EPA should review its 1993 HF study to ensure the health and safety of communities near petroleum refineries utilizing HF.”

In case you’re wondering, there are known safer alternatives to hydrofluoric acid. In 2013, USW issued a report warning that refiners that use HF in their alkylation process to make clean-burning gasoline do not have adequate safety systems in place and are not prepared to handle a release and call for alternatives. Read more about the horrific disaster, its causes, and how we might prevent future incidents here.

Watch the CSB animation of the massive explosion here.