Seven Years after Hurricane Sandy; Are We Ready for the Next Disaster?

Home/Highlights/Seven Years after Hurricane Sandy; Are We Ready for the Next Disaster?
Previous Next

Seven Years after Hurricane Sandy; Are We Ready for the Next Disaster? 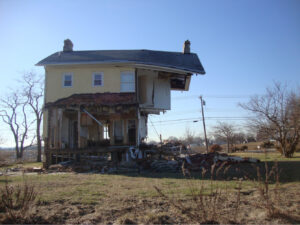 A house in New Jersey destroyed by Superstorm Sandy.

This coming October 29th will mark the seventh anniversary of Hurricane Sandy.  We can all remember the fear and anxiety that gripped communities as we faced winds up to 90 miles an hour and sea levels 14 feet higher than normal. The storm claimed  hundreds of lives and cost tens of billions of dollars in New Jersey, New York and up and down the East Coast. Health-related costs in New York and New Jersey alone were more than $3 billion.

New Jersey is one of the fastest-warming states in the United States according to a recent analysis in the Washington Post. Temperatures here have increased by a full two degrees Celsius over the past century. That’s more than twice as fast as average in the lower 48 states – and the tipping point at which scientists say the impact of climate change becomes irreversible.

Is New Jersey ready for the next Sandy? Our state faces an increased risk of hurricanes and other extreme weather events due to the dynamics of ongoing climate change.  Storms that used to happen once in a century will become commonplace, and we also face dangers from inland flooding, coastal flooding and high temperatures. All of these major changes are a unique toxic threat in New Jersey.

“As we talk about sea level rise and extreme weather events, we must include resiliency planning on how we can protect our workers, communities and the environment from releases of toxic chemicals into flood waters,” says Debra Coyle McFadden, Executive Director of NJ Work Environment Council (WEC).

What does climate change mean for the safety of our state and our citizens?

A few essential safety tips include:

Are we ready for what could happen if a superstorm like Sandy or some other extreme weather event causes a chemical spill, fire or explosion at one of these 5,000 facilities?

The simple, scary answer is that we don’t know. Federal law requires counties and municipalities where such facilities are located to have an Emergency Response Plan (ERP) to address the dangers of an unplanned chemical release and to communicate these plans with the public through annual notification and public access to review the reports.  In 2016 WEC surveyed the 59 municipalities and 19 counties that host the 95 most potentially hazardous facilities that are regulated by the NJ Toxic Catastrophe Prevention Act (TCPA), requesting to review the community Emergency Response Plans as authorized by EPCRA.  The results? Thirty-four municipalities (or 58%) and 16 counties (also 84%) denied the request

Sadly, even with a change in administration since the report was released, the state of New Jersey, which is responsible for enforcing EPCRA, ignores its responsibilities and continues to violate federal law.

Without essential information, we can’t protect ourselves against chemical hazards than can cost lives and destroy property. That’s why WEC and Teamsters Local 877 have filed a federal lawsuit to enforce our right to know.

The legislation will create greater transparency about oil spill hazards in the face of climate change, derailment and other risks. It requires rail companies to develop emergency response and cleanup plans, as well as public disclosure of routes and volumes of oil trains moving through the state.  The bill also requires training for our first responders along pass through communities and mandatory railroad bridge inspection reports be submitted to the NJ Department of Transportation.

On September 30, nineteen labor, environmental and community organizations sent a letter to bill sponsor Assemblywoman Nancy Pinkin (D-Edison) and Chair of the Transportation Committee Assemblyman Dan Benson (D-Hamilton) calling for action on this vital measure before the end of the year. In addition to WEC, supporters include the Professional Firefighters of New Jersey, Teamsters Local 877 (representing workers at the Phillips 66 Bayway Refinery), New Jersey Sierra Club and Environment New Jersey.

The oil and chemical industries are important to the New Jersey economy.  But we can’t lose sight of the the health and safety of workers in those industries, or the well-being of residents in surrounding communities. No one knows in advance when the next storm might hit, when flood waters might rise, or when extreme heat might cause a disaster we can’t foresee.  That’s why it’s more important than ever that industries which handle hazardous substances operate with full transparency and take steps to prepare for emergencies.

WEC, working with our partners at Sustainable Jersey, developed fact sheets on how small employers can reduce the risk of hazardous releases from flooding and storm surges.