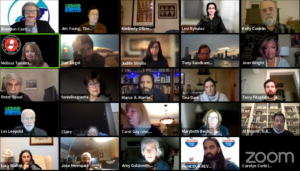 On January 24, 2022, labor leaders, environmentalists, community advocates, and workers came together to demand Governor Murphy keep his campaign promise and create a public bank that invests our tax dollars in us.  Gov. Murphy pledged support for a public bank during his 2014 campaign and appointed an “implementation board” in 2019 which was tasked with holding public hearings.  To date, no such hearings have taken place.

Speakers discussed problems the bank could be used to solve and addressed concerns that the state’s implementation board has not proposed any public facing plan that resembles a public bank.

New Jersey, the 11th most populous U.S. state with nearly 9 million people, collects billions of dollars in tax revenue from individuals and businesses every year.  Most of that money is sent out of state to Wall Street and other locations. Corporate financial institutions charge high interest on loans to New Jersey schools, transit agencies, road commissions, and other public entities.

The current model of outsourcing New Jersey’s financial needs to big banks – mostly based in New York – has led to an accumulated $6 trillion worth of public debt owed to out-of-state financial institutions.

By contrast, in North Dakota – the only U.S. state which currently operates a publicly-owned state bank – tax revenues are deposited in-state and loaned back to residents and businesses at affordable rates. This includes zero interest student loans for students living in or attending college in North Dakota.  While meeting community needs, the Bank of North Dakota is in sound financial condition and earns a healthy return on its assets.

“In my lifetime I find that one thing that’s ultimately guaranteed, is that every few years we have a recession, and at this rate, every decade we have a depression. When we were stuck in that financial collapse in 2008 you could watch every single state legislature fighting and contending and dealing with massive, massive shortfalls. Except for one state: North Dakota,” said Peter Jacob, board member of Our Revolution NJ.

Speakers testified regarding different areas in which affordable credit paid back to the community instead of private interests could improve their own lives and conditions in their communities, and asked the governor to make good on his 2014 promise for a real bank owned by the people of New Jersey.

She also stressed the importance of the state establishing a bank that represents the governor’s campaign promise “As I understand it, there’s two models being evaluated by the implementation committee. One I would call a real bank. It’s funded by state money, which is cycled from the state to be lent to those who need it and it comes back into the state. The programs are for small businesses, housing, student loans, green jobs and lending to state agencies.”

“The second would be funded by soliciting loans from individuals who are willing to lend money on a long-term and low-interest rate basis. They’re targeted for mission specific loans …If this is the model chosen, it is no different than working through the EDA. I want to remind those of you here that in 2019 a Micro loan program through the EDA was deluged with applicants and closed in a few days, serving only a small percentage of those applying.”

“I have nearly 30 years working on the turnpike, and I’ve run into this problem with Wall Street middle managers and my pension fund. For many years our pensions went underfunded with poor returns through hedge fund managers, and they pocketed hundreds of millions of dollars while our pensions were underfunded.” Said Barry Kushnir, president of IFPTE Local 194 (NJ Turnpike Workers). “We need to rehabilitate our infrastructure in New Jersey… New Jersey, including the turnpike, we’re really at the gateway for building our regional economy. Putting that money to use, low interest loans to repair roads and bridges and airports and container ports, is the way to go. And I’d be remiss if I didn’t talk about the opportunities in green energy… wind energy is becoming a huge part of our economy both in south and in north jersey.”

“A public bank was a good idea four years ago and it is a good idea now. We have suffered from underinvestment in our public infrastructure and the passage of the Federal Infrastructure bill is a stark reminder that even federal dollars aren’t going to fill all our needs. We need to get the lead out of our pipes, we need to invest in clean, renewable energy, and we need to build more resilient communities from the flood waters of a warming climate – and a public bank can help us to make those investments,” said Doug O’Malley, director of Environment New Jersey

“We really haven’t heard enough about the public bank of New Jersey since the pandemic hit. Said Joan Wright, president of the New Jersey Retirees’ Education Association. “That’s understandable because we’ve been really busy. But these second terms are about big things. Bold things. And the time has come to be bold. My members want to hear more from the governor about this thing called a “Public Bank.” They want to know what it looks like. How it might make a difference to them and their lives, and they want to know how it will help the communities where they live and how it will help the students, they dedicated their whole careers to educating.”

“99% of domestic abuse survivors are impacted by financial abuse and cannot access loans. When survivors can access different financial resources, they have a better chance of not only surviving, but thriving. Survivor entrepreneurs need access to business resources to be able to start, grow, and sustain thriving businesses.” Said Calandria Ortiz Resende, policy coordinator for the New Jersey Coalition to End Domestic Violence. “Domestic violence is a leading cause of homelessness for survivors and their children. Survivors need access to affordable housing. Victims may also face discrimination in accessing or maintaining housing based on the violent or criminal actions of the harm doer. Additionally, victims are limited in the locations and types of housing they can access because of their unique safety and confidentiality needs… A Public Bank could offer interest-free deferred payment emergency loans to survivors. It could also help address the wealth gap by affording survivors access to financial resources to build assets, such as owning a home.”

“Clean Water Action is fully behind a public bank for many of the reasons that have been articulated by testifiers here, but what’s critically most important is that the work that we do is not to be done in silos.” Said Amy Goldsmith, New Jersey state director for Clean Water Action “Just because I work in the environmental arena doesn’t mean that I don’t support the housing work that needs to be done. If you have a house that leaks like a siv and you’re paying high utility rates and you’re not paying for the food on the table for your family but you’re paying big corporations like PSEG instead. We want to make sure our housing is as sound and as affordable as can be and the state can play a role through the public bank… We could be using a public bank to help make housing affordable, to help make energy costs affordable, to make us more resilient in a climate-changing world for our poor and most vulnerable.”

Many speakers went into detail on capital projects needed to improve their communities.

“We believe that people should benefit from their own wealth. And by putting our own funds together, we don’t have to go and ask anyone for anything. A state public bank could be a depositor in our bank, which would leverage funds so that we can make micro-loans at the retail level, where a public bank does not have to do that.” Said Algernon Ward, Jr., president of the board of incorporators for the Trenton Community Credit Union. “We’re where the rubber meets the road. A public member credit union supported by a public bank, that’s the best of both worlds.

“My heart is with the labor movement… I understand the need for collective action, and how it’s really about the power of the people. One thing I would advocate for strongly is to have public pensions deposited into a public bank on a state-wide level.”

“There are three areas in this policy proposal that I would like to highlight in the context of a public state bank,” said Melissa Tomlinson, an educator in Atlantic County and community organizer. “…developing a lockbox fund to meaningfully and deeply invest resources into increasing homeownership in redlined communities, the creation of a statewide Land Bank Commission for NJ to effectively implement its Land Bank Law, and the support of New Jersey for the expansion of Community Land Trusts in redlined communities. “

“All of these areas require funds. Revenue that the state does not currently have unless we start looking at the areas that are not generating us revenue and are instead costing us more – such as exorbitant bank fees and interest rates on funds that are borrowed from public banks.

To observe safety protocols during the COVID-19 pandemic, the public hearing on a public bank for New Jersey was held virtually.

A recording of the event can be found here:

To learn more about the campaign for a real public bank, click here, or contact Brandon Castro at bcastro@njwec.org

About the Author: Brandon S. Castro