Governor Chris Christie continues to fail in carrying out his legal responsibility under federal law for ensuring that the public has access to an up-to-date Emergency Response Plan (ERP) in each of New Jersey’s counties and municipalities in the event of a chemical plant fire, explosion, or other toxic emergency. The Governor’s State Emergency Response Commission (SERC) is supposed to ensure public access to these plans. However, despite acknowledgment of the violation, they have not done so.

Public access to these Emergency Response Plans as required under the 1986 Emergency Planning and Community Right to Know Act (EPCRA) is critical given that New Jersey has more than 5,000 facilities that use large amounts of hazardous chemicals, with the highest population density of any state.

As detailed in a new research report issued today, ACCESS DENIED, the New Jersey Work Environment Council (WEC) wrote to the 59 municipalities and 19 counties that host the 95 most potentially hazardous facilities that are regulated by the NJ Toxic Catastrophe Prevention Act (TCPA), requesting to review the community Emergency Response Plans as authorized by EPCRA.

Thirty-four municipalities (or 58%) and 16 counties (also 84%) denied the request, reflecting continued confusion about the federal law and an ongoing practice of the Christie administration to allow this clear violation of EPCRA.  The WEC report is available at www.njwec.org

John Pajak, President of Teamsters Local 877 and WEC Board member said, “City officials obviously believe that they can just ignore the public’s legal right to information about our own safety. They are denying members of the community the opportunity to participate in the process and be informed on emergency plans to protect themselves and their families in the event of a chemical release.”

“The safety of citizens and first responders must be paramount when any type of hazardous or dangerous material is present,” said Dominick Marino, president of Professional Firefighters Association of New Jersey and WEC board member, “having the correct and current Emergency Response Plan is the best way first responders can properly plan for an emergency. It is important that information be reviewed and updated at least annually because conditions and hazards can change.”

“Governor Christie continues to shirk his legal responsibility by not addressing the systemic problem in New Jersey that municipalities and counties don’t understand their legal responsibilities to public access under EPCRA. This was made clear by some municipalities releasing detailed plans and others flat out denying our request,” stated Debra Coyle McFadden, assistant director of WEC.

“Federal law is clear,” said David Tykulsker, an attorney and WEC Counsel. “It does not provide for blanket denial of all public access to emergency response plans, whether on so-called security grounds or anything else not in the Federal EPCRA statute.”

“Although we should be vigilant about terrorism, the greater risk to workers and community members is exposure to chemicals, particularly if there is a disaster, and we should be just as vigilant in preparing for and reducing that risk. Community members need information about how best to prepare themselves for that more likely scenario,” said Dan Fatton, executive director of WEC. 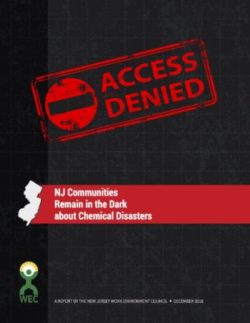