WEC is pleased and honored to recognize five outstanding leaders at our 2016 Awards Dinner, which will also serve as our 30th Anniversary Celebration.

Colandus “Kelly” Francis is President of the Camden County Branch of the National Association of the Advancement of Colored People (NAACP). Kelly was born in Enfield, North Carolina, and lived in Newport News, Virginia until his family moved to Camden, NJ in 1949. He continues to reside in the Parkside areas where his family members have lived for the past 45 years.

Kelly is a graduate of Hatch Jr. High and Camden High schools and attended Salem County Community College, Pennsylvania State University and Rutgers University. He worked for 34 years for the U.S. Postal Service and retired as an electronic technician in the field of automation and computer technology in 1989.

While with the postal service, he served as a union officer for the American Postal Workers Union, holding various offices including general president. He is currently serving in several volunteer capacities as president of the Camden County NAACP, vice president of the Camden City Taxpayers Association, vice chairman of Parkside Business and Community in Partnership, member of the Camden City Early Childhood Advisory Council, member of Superior Count Sensitivity and Cultural Awareness (SCAN) committee, member of the Environmental Justice Advisory Council to the NJ Department of Environmental Protection, member of the Board of Directors of the NJ Work Environment Council (WEC), and chairman of the board of directors of the Fair Share Housing Center.

He is the father of a daughter, Robyn, and two sons, Colandus, Jr. and Kevin and three grandsons, Colandus III, Christopher and Joseph, as well as four great-grandchildren.

Jeanne Otersen is Chief of Staff for the Health Professionals and Allied Employees (HPAE). HPAE represents 13,000 nurses and health care professionals in New Jersey and Philadelphia, and is affiliated with the American Federation of Teachers. Jeanne has been with HPAE for 22 years and previously served as Strategic Plan Coordinator and Public Policy Director for the health care union. Jeanne has coordinated major conferences and membership mobilization, community outreach, coalition-building and legislative campaigns and supervised the policy and research staff.

Prior to her work at HPAE, Jeanne was a consultant to women’s, environmental and labor organizations on legislative, political and community campaigns. She held positions as Program Director/Acting Director for the NJ Environmental Federation, worked on the Policy and Public Relations Staff for the Committee of Interns and Residents and was Executive Co-Director for New Jersey Citizen Action (NJCA), where she was the founding director.

Jeanne has provided testimony and has been a constant advocate for New Jersey’s nurses and health care professionals. She was listed in NJ Biz and NJ Spotlight as Most Powerful Advocates/Lobbyists from 2013-2016. She received the NJ Citizen Action Leadership award in 1998 and 2002 and a NJ Assembly and NJ Senate Citation in 2002.

Jeanne serves on the Board of Citizens Policy and Education Fund. She also serves on the NJ Citizen Action Health Care Committee and NJ AFL-CIO Health Advisory & Lobbyist Committee.

Jeanne has long been involved with the New Jersey Work Environment Council, thanks not only to her work at HPAE, but also the fact that she is married to WEC’s founding director, Rick Engler. Jeanne worked with Rick in the early eighties on the New Jersey Right to Know Campaign.

Jim Young is Principal and Secretary, The Labor Institute (LI), a 30-year-old labor education organization, based in NYC. Jim has more than 20 years of experience working with unions and labor coalitions and has been with The Labor Institute since 2005. He is currently leading the LI’s work with the United Steelworkers on member education about climate change, working closely with USW District 12, which covers 11 western states in the US, and with District 4, which covers the Northeast, including New Jersey, New York, Delaware and New England.

In 2006, Jim and the LI’s Les Leopold helped the United Steelworkers and Sierra Club found the BlueGreen Alliance, a national partnership uniting national unions and environmental organizations dedicated to expanding the number and quality of jobs in a clean energy economy. From 2006-2014, Jim served as BGA’s Vice President of Programs. He also authored or co-authored numerous reports, including Building the Clean Energy Assembly Line: How Renewable Energy Can Revitalize U.S. Manufacturing and the American Middle Class (2009). Prior to joining the Labor Institute, Jim was a media and strategy consultant to many unions, including 1199 Service Employees International Union, Utility Workers Union of America, and the Association of Flight Attendants. He also worked for both the New York Committee for Occupational Safety and Health (NYCOSH) and the New Jersey Work Environment Council (WEC), where he managed communications programs and helped launched the organization’s Healthy Schools Program.

Jim now serves on the WEC Board of Directors. A former full-time journalist, Jim has written about labor rights, about workplace safety and health, and about the environment for Newsday, The Philadelphia Inquirer, The Village Voice, The Guardian (U.K.), Sierra Magazine and many other publications.

WEC is very pleased to honor two remarkable leaders with our new Rising Star Award, which is intended to recognize outstanding new leaders from labor, environmental and community organizations. Our inaugural recipients:

She has worked with the Coalition for Healthy Ports to hold the Port Authority accountable for the pollution they produce for the community. She serves as a Executive Committee Member with League of Women Voters-NJ Young People’s Network. Her organizing background included work with AFSCME, coordinating their political and legislative advocacy, as well as serving as a congressional aide to Congressman Steve Rothman (D-9).

She earned both a BA and a master degree from Rutgers. She is currently in the 2016 Environmental Leadership Program class. 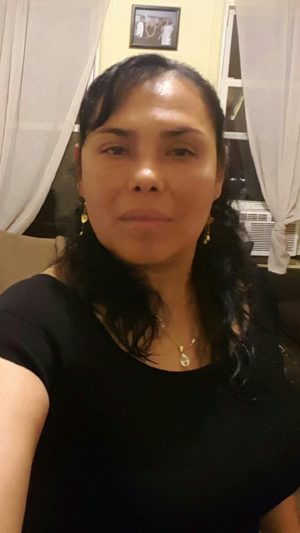 Reynalda Cruz started as a member of New Labor and has since joined the staff as an organizer. She is a single mother of three, and previously worked in restaurants, hotels and warehouses through temp agencies.

She helps organize and motivate members to take action against abusive employers that steal wages and for improved workplace health and safety conditions. She is also involved in leadership development of members and coordinates New Labor’s “Consejo” or Worker Council meetings.

Reynalda wants all workers to have a voice and a vote on the job around workplace conditions; she wants workers to be unionized to help provide that opportunity, including in the newly chartered local USW 4-555, in which she is serving as the the first President.

Please consider supporting WEC and helping us honor our 2016 honorees by placing an ad in the program journal (print & online) and buying tickets, or purchasing a sponsorship package for a combination of both.