What Is An Ideal Wage Gap?

Home/Highlights/What Is An Ideal Wage Gap?
Previous Next

What Is An Ideal Wage Gap?

According to public opinion polls, Americans typically believe a good pay ratio is 7 to 1. In other words, the top paid CEO in the United States should make 7 times what the average worker makes. And yet the American reality is much different. In fact, the top paid CEOs in the United States make roughly 844 times what the average worker makes. 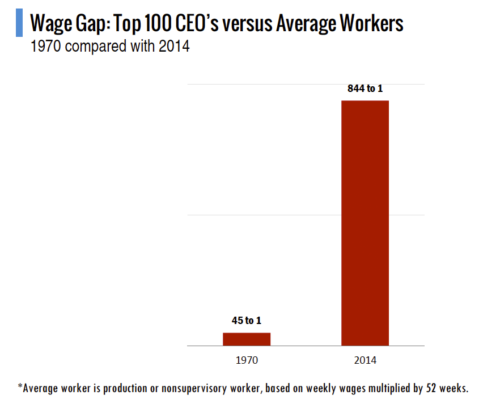 This stunning statistic represents the antithesis of the American dream: the idea that if someone works hard then they deserve financial security; it also belies the myth that as the pool of wealth increases, all boats rise. These outrageously disparate numbers indicate a broken economy, engineered by the top 1/10th of the 1% wealthiest Americans, which has fostered a destructive and amoral distribution of wealth.

In a move to address the extreme and corrupt distribution of wealth, the city council of Portland, Oregon passed a tax this Wednesday on companies in which the top-ranked executives make more than 100 times the median pay of their average workers. In doing so, the city of Portland has shown it is willing to take steps to reverse the negative effects that extreme income inequality has on its residents.

But right here in New Jersey, we face a torrent of economic and social inequality issues exacerbated by corporate greed, and the financial strip mining of our economy by Wall Street firms and big banks. It’s time for New Jersey to become a leader in combatting a reckless, unsustainable, and amoral economy which leaves many to starve, while a privileged few play by a different set of rules and benefit endlessly.

WEC recently launched our Public Need over Corporate Greed campaign to educate more people about our common challenges, and help us break out of our silos. We hope that New Jersey legislators will consider similar legislation, taxing CEOs who make more than 100 times what their average workers make.

It is our firm belief that working people should never struggle to survive while a select few grow rich off their labor. Until we stand up to the top 1/10th of the 1%, we’ll continue to fight for scraps at their table. Let’s take back that table- let’s show them that this is our economy, and that if it doesn’t work for everyone then it doesn’t work at all.

About the Author: Brandon S. Castro